It is a story about spiritual freedom and pure soul.A man called 1900 was born on the ship,then he grew on the ship and died on the ship.The ship called Virginian bears his whole life.In 1900;s time,only once he made a decision to leave the ship and see the world.but at last he turned back.Because he can;t face the infinite city life.

1900, an abandoned baby which is taken care by one of the crews in the ship, Virginia. 1900 was the year which the crew discovered the baby, thus, the boy was named 1900. The crew dies several years later and at that time, 1900 is entirely isolated. He is a genius and he knows how to play the piano without being taught. He gets his own style and wins the applause of passengers. However, he isn’t happy at all. What he is searching for is love and care, yet he cannot find them. In this essay, I will examine how 1900 suffers from loneliness and how he is afraid of changes.

The only companion of 1900 is the piano; he gets used to expressing his feeling via music. Yet, can the piano share with him? Can the music be the tonic for his loneliness? The poor guy has no choices; he was born to be lonely. Maybe it’s his fate. 1900 always wants to attract people by his absorbing performance. Though there is, in fact, nearly no conversation between them, they even don’t know one another. He still wants to be surrounded by the crowd. 1900 doesn’t want to be alone; he enjoys the time being accompanied by people. This can explain why he feels so disappointed, frustrated and he stops playing the piano when the crowd leaves as the destination is reached. 1900 has to become solitary again!

One of the passengers admires his talents very much and tries to talk to him. The farmer shares with him about his misfortune and loneliness. 1900 knows the feeling better than anybody does as he has been suffering for 27 years! He hasn’t disclosed his feeling to others; he just says that he gets a friend sharing the similar situation. It’s a paradox that on the one hand, he wants to speak out his own feeling, which has buried in his heart for a long time, and shares with people; on the other hand, he can’t pluck up his courage to mention his situation in front of people. Maybe it is of no use to tell others or 1900 doesn’t want anyone to sympathize him.

Loneliness makes him afraid of contacting strangers, lack of confidence and shy while communicating with strangers. When there’re two strangers coming to inform him the competition, he runs away and hides himself. Poor 1900 is afraid of being hurt. With no doubt, loneliness adversely affects his personality. On the shipboard, a young, pure, beautiful girl has caught his attention. He loves the girl and wants to send her a gift. He doesn’t know how to initiate the conversation. 1900 practices again and again in the cabinet. He is too timid to send the girl his record. His personality makes him miss a chance. 1900 is very unhappy and breaks the record. Again, he just keeps his mouth shut and never shares with the others. It is obvious that he no longer wants to share, he is too tired to find opportunities to air his feeling.

Changes make 1900 scared, he wants his everyday life remains the same. For 27 years, he stays on board and never treads on land. Although his crews always persuade him to get off, he is reluctant to try. Several months after the girl had left, 1900 suddenly wants to tread on land. His reason is that he wants to listen to the voice of the sea as he can only hear it clearly on land. However, it’s true that he wants to find the girl and expresses love to her. 1900 hides his feeling again. Yet, when he is on the halfway of the ladder that leads to the land, he stops. He stands there to look at the city in front of him. 1900 gives up treading on land and returns to the ship.

1900 can live safely on the ship as he can see the ends of the ship. Many years later, as the ship is too old and it needs to be exploded to pieces. One of the crew knows that he will be still on the ship. He tries to find him. Before his death, 1900 tells the reasons for not treading on land when he’s walking down the ladder. “ I’m not afraid of what I can see, I’m afraid of what I can’t see”, 1900 is frightened as he can’t see the end of the city. “ Where is the end of the world?” Moreover, there’re only two thousand passengers on broad at a time. It’s a fixed number and it will not change. It can explain why 1900 prefers staying on board.

He takes the piano as an example, “ There are finite keys on the piano”, and he can make “infinite music” out of it. However, the world is a piano that is too big for him. There are infinite keys in the world, how can he make music out of it? It implies that there are so many changes in the world; he can hardly face the challenges. “There are thousands of streets in the city…which one should I choose to die?” It shows that 1900 is scared by the ever-changing world and he is too tired to choose. He thinks that he can’t adapt to the changes as “ the world has passed me (him) by”. In addition, fame, fortune, girl can’t make him tread on land. 1900 chooses to die on the ship rather than getting off. It can be seen that how deeply he is afraid of changes. The marvelous life of 1900 makes him become the legend. 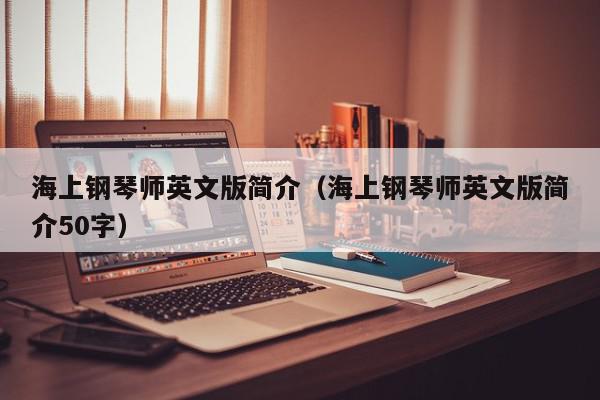 In 1900, an orphan is abandoned in the four stacker SS Virginian. He is then brought up by Danny, a coal-man from the boiler room, who determines to raise the boy as his own and names the boy as 1900. Unfortunately, a few years later, Danny is killed in a workplace accident, and 1900 is forced to survive aboard the Virginian as an orphan. When growing up, 1900 shows out of the extraordinary self-taught piano talent. He befriends Max in 1926, but never leaves the vessel, even when presented with the opportunity to fashion a new life with a pretty immigrant girl. But he stays current with outside musical trends as passengers explain to him a new music trend or style, and he immediately picks it up and starts playing it for them.

His reputation as a pianist is so renowned that Jelly Roll Morton, of New Orleans jazz fame, on hearing of 1900's skill comes aboard to challenge him to a piano duel. 1900 doesn't win the duel until he plays an original piece which imprees the crowd a lot.

Having heard of 1900's prowess, a record producer brings a primitive recording apparatus aboard and cuts a demo record of a 1900 original composition. The recorded music is created by 1900 as he gazes at a girl who has just boarded and who he finds attractive. When 1900 hears the recording, he takes the master, offended at the prospect of anyone hearing the music without his having performed it. He then tries to give the master to the girl who inspired it, but ends up smashing it when he fails.

1st January 1900, ship crew Danni picked up a abondonded baby on the piano inside the hall of the ship， and he named this baby 1900. 1900 grew up happily under the care and white lies of Danni. After the accidental death of Danni, 1900 came to the hall by chance and he saw the piano for the first time. Now, the legend of 1900 begins.

Life is like the passangers on the boat, abroad, getting off aboard and getting off again, in this sequence. to 1900, there is nothing more about life. Although he lives on the sea, but he has looked through all the honour, lonliness, gain and fall of life amoung the men on the land around.

at last, this talented man is going backto the sky, the heaven. Are there pianos in the heaven? at the time of the explosion of the ship, 1900 played his hands in the air, the beautiful fingers move as the background music flows, as if knocking on the doors to heaven.

Actor 1900 ( name ) the entire life is a tragedy. He was a steam ship abandoned in the orphans, were aboard a well-burning stoves for the adoption, however good may not be good, a furnace workers killed, only 8 years old once again become a 1900 orphans. The talent that he learned without teacher to become a pianist, but this makes him naturally to vulgar world deeply ring meaning, he never came ashore from the boat to go, only because New York boundless buildings and the stream never stops flowing. The crowd to his lost. Even if later met a girl fall in love at first sight, he thought over and over again later, or abandoned ashore to find first impulse. He will always remain in the ship, in the end, the only good friend Marx warned him Hulk will be destroyed, he was reluctant to leave, then started from the birth did not leave Virginia number 1900 sympathetic ship in the sea. 1900, this is no birth record, and no proof of identity of people, without leaving a trace on the earth, such as the passage of the notes, invisibly.